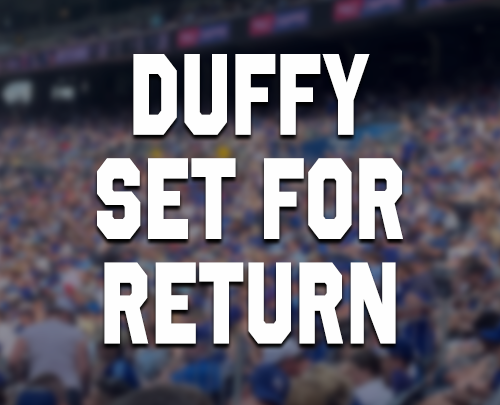 Royals pitcher Danny Duffy will make his return to action Wednesday after a stint on the IL. Duffy will face the Yankees in New York, setting up a potential home start against the Twins on July 3.

Duffy went on the IL in mid-May with a left forearm flexor strain. After rehabbing for more than a month, Duffy is set to take the hill in New York on Wednesday. He did not make any rehab starts, and will instead return to the rotation with some type of limit Wednesday.

Danny Duffy was Kansas City’s best starter over the first month and a half of the season, logging a 1.94 ERA in seven starts. He held opponents to just a .222 average over 41 2/3 innings, compiling 48 strikeouts and a 4-3 record.

His fast start in 2021 helped Kansas City get off to a 16-9 start in the month of April, but the team has come back to earth a bit over the past month or so.

Duffy will look to get through two road starts, at New York and at Boston, before returning home for a start against the Twins.

Duffy will look to pick up where he left on for the Royals on Wednesday. Kansas City badly needs stability from another starting pitcher, and Duffy could be just what the doctor ordered.

“My expectation is to take it one step at a time and hopefully pick up right where I left off,” Duffy said. “That’s what I’ve worked so hard for, and that’s my expectation every time out regardless of how much time I’ve had off.”

If Duffy can get on track and continue to pitch well, Kansas City’s outlook moving forward becomes much brighter. Kansas City’s bullpen has been solid this season, but due to lack of starting pitching depth, they’ve been overworked.

Duffy, who is in the final year of his contract, has a lot to prove as he pitches to earn another long-term deal with the Royals. The 32-year-old is beloved by Royals fans, and considering his “bury me a Royal” mentality, a reunion is hopefully in the cards in 2022 and beyond.

Kansas City is currently on a 10-game road trip, but they will return home on July 2 to face the Twins as part of a six-game homestand. The Royals will play three with Minnesota over Fourth of July weekend, followed by three games with the Reds before hitting the road again. | TICKETS

Kansas City must first get through games with the Yankees, Rangers and Red Sox. The Royals opened the trip with a 6-5 win over New York, with Duffy set to start game two.

If the Royals can finish with a 6-4 road trip or better, they will return home no worse than three games under .500 to play the Twins and Reds. Both teams are currently at or below .500, so the Royals have a great opportunity in front of them moving forward.