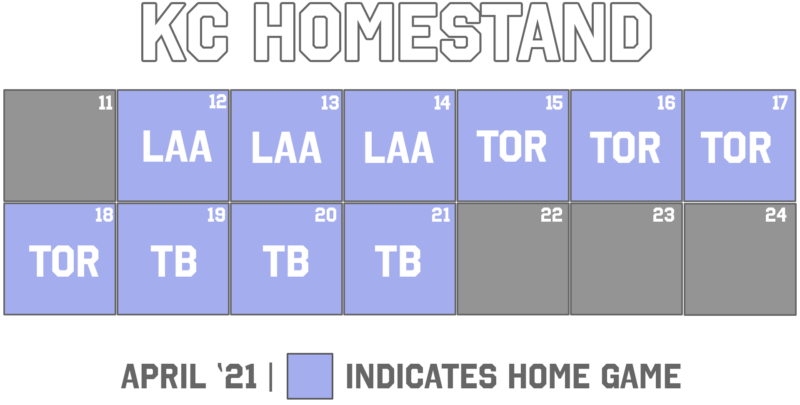 The Kansas City Royals are set to begin a 10-game homestand from April 12-21 at Kauffman Stadium. Kansas City, who enters at 4-3, will host the Los Angeles Angels, Toronto Blue Jays and Tampa Bay Rays. Royals tickets are available now for every home game.

The Angels come into Kansas City with a 6-3 record in the early going, good enough for 1st in the West. With a star-studded lineup that features Mike Trout, Albert Pujols, Anthony Rendon and Shohei Ohtani, the Angels pose a big test for the Royals’ pitching staff.

The Blue Jays will enter Kansas City as one of baseball’s most interesting teams. Led by a trio of sons of former big leaguers, there’s a lot to like about this Blue Jays team. Vladimir Guerrero Jr. is on a tear to open the season, batting .379 with 2 homers and 8 RBI in his first nine games. Bo Bichette and Cavan Biggio are also a big reason why Toronto were picked by some to win the East in 2021.

Any time you get a chance to see the reigning American League champions, it’s an exciting series. The Rays don’t exactly have the most well-known roster in baseball, but they know how to win games. Rookie Randy Arozarena, who burst onto the scene in the 2020 playoffs, is probably the most well-known Rays position player. On the mound, only time will tell if Kansas City will have to face Tyler Glasnow, who is taking over as the ace of the Rays staff after the departure of Blake Snell.