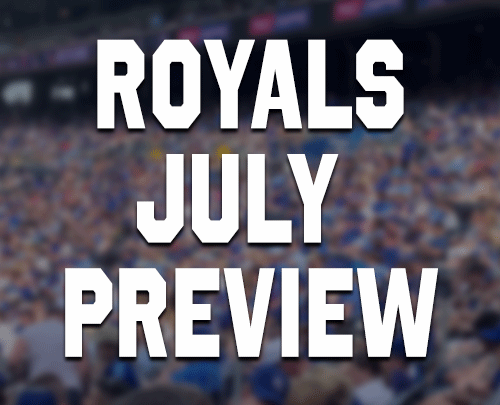 The Kansas City Royals (33-46) find themselves at a crossroads heading into the month of July. The team has dropped eight straight and finished June with a 7-20 mark. In a game all about analytics and numbers, we can all hope that a simple calendar change can catapult the Royals out of their funk and turn their season around. The Royals have 16 home games in July.

Kansas City will open July by finishing a series with the Red Sox before returning home for six games against the Twins and Reds. The Royals and Twins will play July 2-4, followed by an early week series with Cincinnati from July 5-7.

The Royals will finish the first half of the season with four games in Cleveland before getting some rest during the All-Star Break.

Kansas City will open the second half by playing 10 of 12 at Kauffman Stadium. They’ll play three with Baltimore in Kansas City, followed by a quick trip to Milwaukee for two games. They will then play seven more games at home against Detroit and Chicago.

The Royals have not been able to get things clicking at the same time over the past month or so. It seems that when they hit well, the pitching struggles. Or when they pitch well, the defense struggles. In order for Kansas City to get back on track, they will need to get back to doing the fundamentals well. Hopefully the Royals having 16 home games in July will be a key factor as well.

One of the biggest issue for Kansas City has been hitting with runners in scoring position. The team has the tenth-best batting average in the league, but are 23rd in runs scored. If Kansas City can start cashing in on their opportunities on offense, it will take a ton of pressure off of the team in other aspects of the game.

Another issue for the Royals has been walks. Royals pitchers have walked 314 batters this season, fifth-most in the major leagues. Walks lead to higher pitch counts and shorter outings, which is why Kansas City has just 19 quality starts this season, the fourth-fewest in baseball.

If Kansas City can figure out how to knock in runners in scoring position and limit their walks on the mound, this team has a chance to turn things around rather quickly.