The Kansas City Royals have had quite the history of teams and players with guys like Salvador Perez, George Brett, Bret Saberhagen, Bo Jackson, and Billy Butler, to name a few. This year the team took on, “#RaisedRoyals” and we are all proud of the story of who we are as a team and the changes and obstacles we’ve gone through. As time has changed, we’ve seen great players come and go and seasons pass by, but the jerseys the boys have worn have changed throughout time too. Take a look at Kansas baseball history and the jerseys we’ve all worn proudly on our backs. 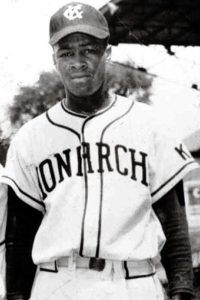 Bet you didn’t know it, but before the Athletics were the Oakland A’s, the team was the Kansas City A’s. Brought to Kansas City in 1954, the Athletics found a home in Municipal Stadium and was the third best in attendance, one time racking in 1,393,054 fans. Charlie O. Finley owned the team and changed the Athletics colors to kelly green and fort knox gold. Although, come 1967, the A’s were set to move to Oakland but U.S. Senator Stuart Symington had made plans for a new stadium (Kauffman Stadium) and would not stand to lose a proffessional baseball team. Therefore, out went the A’s but in came the Royals. 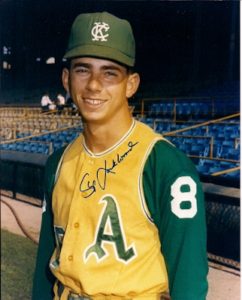 The new Kansas City Royals were not to start until 1971 but Senator Symington would not stand for a three year hiatus and had the Kansas City Royals playing in the 1969 season. The away jerseys of the new franchise were gray with a navy “Kansas City” front. 1971 was the Royals first winning season, perhaps we could use a bit of this jersey magic, but we have faith the golden jerseys will still turn the season around. 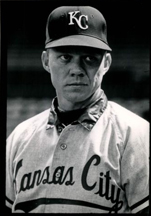 The Kansas City Royals have been best known by the powder blue jerseys and hats. The powder blue was introduced in 1973 and is still very much a key color for the Royals today. Lou Piniella was a part of the jersey change when he played from 1969 to 1973. During his time in powder blue, he was named the American League’s Rookie of the year in 1969 and listed to the 1972 All-Star roster. Piniella was the first-ever batter for the Royals when he started on Opening Day in 1969. 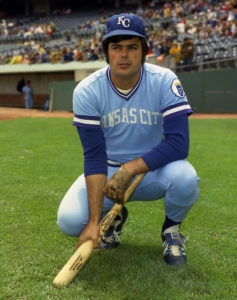 “Party like it’s 1985,” has been said many times and for a good reason. The Kansas City Royals won its first World Series and the team looked fresh with white Royals jerseys with the Royals in script font that we still have today. There were 2,162,717 fans there to witness the history being made. George Brett and Dennis Leonard were among the starters of the Kansas City Royals and brought home the victory. The new jerseys featured numbers on the front lower side, Royals written across the chest, and the team went back to button down uniforms again. 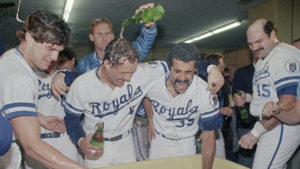 With some of the greats, Bo Jackson, Bret Saberhagen, and Mark Gubicza, 1989 was another year of a winning record and new jerseys. The Royals went back to a pullover but added the “KC” logo on the jersey for the first time. The jersey also went back to the royal blue instead of the powder blue. The team was ranked 6th in attendance for the MLB. 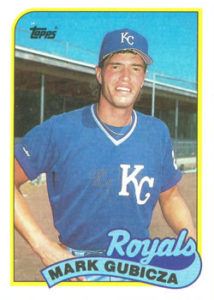 Although 1995 saw a losing season of 70-74 in wins to losses, the team acquired some remarkable players like Mike Sweeney, Johnny Damonand Joe Randa but also returned notable players like Mark Gubcza and 1995 All Star Kevin Appier. The jerseys remained royal blue, but went back to button down. It also showed a much bigger Royals across the front. The team also switched away jerseys to say Kansas City again instead of Royals. 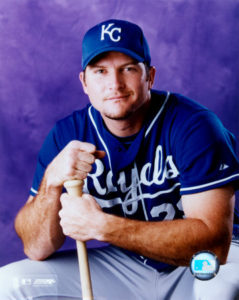 The 2003 jerseys altered the style and went sleeveless. They were now vest jerseys although the team coordinated the shirt underneath, always matching the sleeves. The jerseys varied from gray and black, to gray and blue, and white and blue. Also, Mike Sweeney had “C” listed on his jersey, making him one of the few publicly recognized captains in all of MLB. 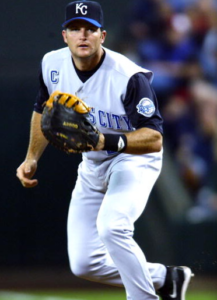 Going to the dark side, the Royals initiated the all black jersey in 2004. The Royals had another losing season of 58-104 due to multiple players unable to play, like Mike Sweeney, Benito Santiago and Juan Gonzalez. 2004 began the downward spiral of losing records. Luckily, in 2009, the Kansas City Royals would begin rebuilding and things began to look up. 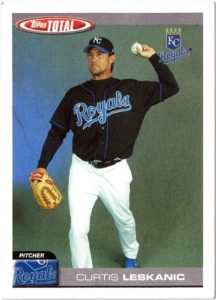 We all know what happened in 2015, and perhaps we can blame it on the reinstated powder blue jerseys. The Royals won the 2016 World Series and had similar jerseys worn by the 1985 team. With a stacked team of players like Johnny Cueto and Yordano Ventura pitching, or Lorenzo Cain Aldides Escobar hitting. Needless to say, 2015 was a year to remember. 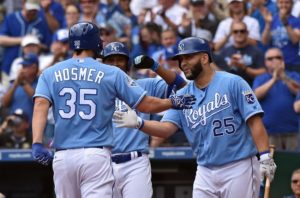 We’re finally to the present and at the last evolution of the jersey, for the time being that is. The Royals sport a golden Royals jersey and look fresh every time they hit the field. Haven’t seen them yet this year? (You’re in luck…Tickets For Less always has some of the cheapest tickets and the best seats available). 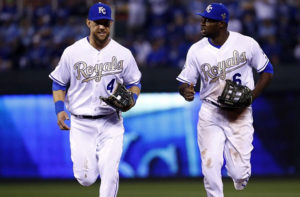 Whether you were #RaisedRoyal or just picked up an interest recently, we love to head to the K and catch a good game. Times may change uniforms, players and teams, but the Royals will forever be our team and we will all wear our powder blue with pride.