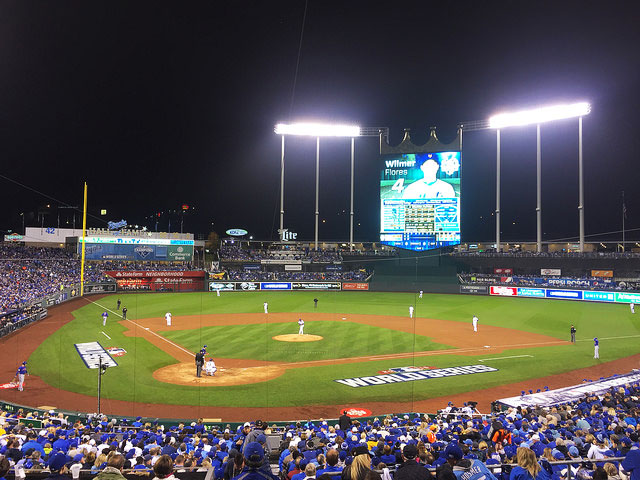 The MO-JO is back with the Royals.

They’ve given us every indication in the past week that it’s go time! The next 30 days will let us know how this team stacks up. The Royals are in a stretch of playing 24 of 30 games against the AL Central.

The Royals got a jump start, taking a series against the front-running White Sox over the weekend.

While the Royals lost 12 of 16 recently, the White Sox turned around and gave most of it back by losing 8 of 10. Meanwhile, the Cleveland Indians are quietly sneaking up on everybody. Corey Kluber is the stud of the Tribe’s pitching staff but he’s being out-pitched by Josh Tomlin and Danny Salazar. Tomlin has 6 wins already and Salazar has a 1.80 ERA. Kluber has a bloated earned run average of 4.10. The Tribe will not be going away anytime soon. Detroit is hanging around also but the Tigers are growing long in the tooth. This looks like a 3-team race to the wire.

Eric Hosmer has carried the Royals through the first 2 months of the season. He’s hit above .300 and leads the team in RBIs.

But Alex Gordon, arguably the most popular player on the team, is off to a dreadful start. He strikes out nearly every other time at bat. Gordon is on pace for about 200 strikeouts this season. His batting average is hovering around the “Mendoza Line.” He’s what you can call the 6th man in the lineup.

These numbers are not good for a 32-year-old who is the highest paid player on the team. Gordon is clearly not performing anywhere close to expectations after signing that whopping $72 million dollar contact in the off season.

The DH is another area where the Royals are getting very little production. Kendrys Morales is struggling mightily. He’s watched his average plummet to .190 while hitting only 5 HR after belting 22 last season. Ned Yost, the most optimistic manager in the history of the game, gives his DH a free pass. “It’s just a matter of time before Morales gets going.” That’s pretty typical from the Royals Manager. Ned’s words tend to go in one ear and out the other when he starts covering for his players.

While the Royals have scuffled to score, there is reason to believe the bats will come around in time. Gordon and Morales should start hitting soon. Moose has been sidelined with a bad thumb. You figure he’s going to bust out at any time.

The Royals have been able to hold their heads above water for the first quarter of the season. History shows they’re a better second half team. Offense is important but the starting pitching will again dictate how deep this team goes in the postseason. The No. 1 job right now is keeping pace with Chicago and Cleveland. It should be a fun summer!

Find Royals tickets for sale at Tickets For Less. Call 913-685-3322 or visit our website to make your orders.