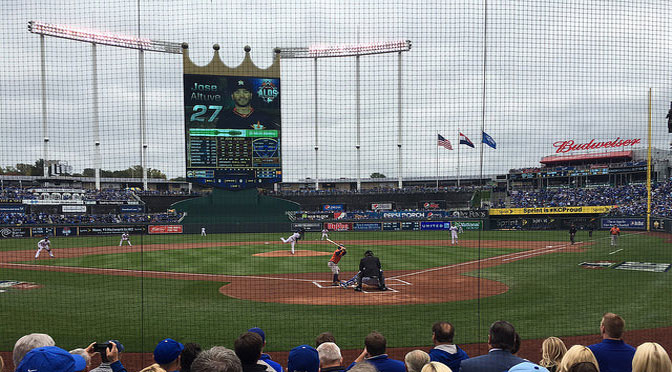 I continue to marvel at the success of the Royals. They’ve been a joy to watch all season, if they can just keep this rotation humming, and we’re not asking for much.

We need 5 decent innings out of each of the starters to get it to the bullpen. If that happens, the manager can’t screw it up. Ned Yost is a survivor. Many of his moves leave me scratching my head. The 61 year old skipper makes it easy to second guess his decisions, which can be best described as beyond conventional wisdom. Before Game 5, Yost says he has put trust in his coaches and isn’t worried about them making so called “right” decisions.

After last year’s wild card thriller, I didn’t think there could be another one of these magical playoff finishes, but there was, despite some questionable moves by Yost. The dramatic comeback in Game 4 at Houston is one for the books. This was great for baseball and great for Kansas City.

But still more questions remain about the decisions from the dugout. In the 5th inning, with Yordano Ventura showing signs of laboring after 8 strikeouts, Yost had no one warming up in the pen. The Astros would push across the go ahead run before the manager got the hook on Ventura.

Then Yost brought in Herrera to pitch the 6th. The manager again opened himself up for more criticism and second guessing. I’ll give him a pass on that one since it was an elimination game. There was disaster for the Royals in the 7th when Ryan Madson was brought in to pitch. He should not be pitching in late relief in one of these high-stakes playoff games. He got rocked, and it appeared the season was over. The Royals were doomed, down 6 – 2 into the 8th.

Again, the manager came out smelling like a rose after the Royals put up a 5 spot against the Astros’ bullpen, which is just dreadful.

While the city was celebrating the 8th inning explosion, I couldn’t help but think back to an inning earlier when Terrance Gore was thrown out on a controversial call at third base. Again, why was Gore running with 2 outs in a one-run-elimination game?

The Royals were able to bite the bullet again. Ned has been given the largest payroll in club history ($113 million dollars).

The Royals caught lightning in a bottle a year ago and came within 90 feet of winning a championship. They’re not the Cinderella team this time. Anything less than a World Series appearance would have to be considered a disappointment.

This team ran away with the division title and won more games than anyone in the American League. THIS TEAM IS NO FLUKE! The bottom line here, the Royals are really good and clearly a team with the will and talent to win. They have shown they can play through many questionable moves by the manager.

I hope Ned Yost proves me wrong. I think Escobar at the top of the order and Gordon batting in the 8th hole is not good. If that formula works in this postseason, then I will be convinced that Yost has not been rolling the dice after all when making out his line-up card.

Winning takes care of everything in sports!