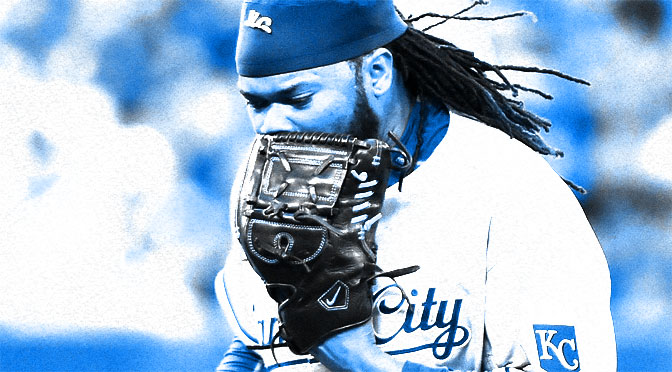 The Kansas City Royals jumped out to a hot start in the ALCS, winning both games at Kauffman Stadium to take a 2-0 lead before traveling North towards Toronto for games 3, 4, and 5.

Unfortunately for KC, the Johnny Cueto fans had become accustomed to seeing since his arrival, showed up for his game 3 appearance, giving up a record 8 runs in 2 innings of work before Ned Yost finally had to pull him off the mound.

Yost was obviously frustrated with Cueto’s performance following the loss.

The good news for the Royals is after falling behind 11-4 heading into the ninth inning, Ben Zobrist and Co., hammered in four runs to give a slight scare to Blue Jays fans and force the coaching staff to throw in its main closer, which could be an advantage for Kansas City.

A loss is still a loss, and Toronto found some mojo on the offensive end, but the Royals made it respectable and reinforced their ‘never-say-die’ mantra which has delivered back-to-back ALCS appearances.

As the series continues on, Chris Young and R.A. Dickey will take the mound for game 4, with the headliners of each pitching staff taking the hill in games 5, 6, and potentially 7.

The Blue Jays are obviously much more comfortable playing at home, and with the way the ball seems to fly out of the park at the Rodgers Center, a home run hitting club like Toronto has a significant advantage over a team like the Royals which have struggled with giving up the big hit, not to mention the turf in Toronto is notoriously slow, which makes it tougher for a team like KC which scored by moving runners around the bases.

Even with the loss, Kansas City still owns a 2-1 advantage in the series and is guaranteed to play at least one more game at home, however, the Royals can still win the ALCS in Toronto.

The key will be maintaining solid pitching on the corners and away from Toronto’s big sticks, limiting their ability to score in bunches by knocking the ball over the fence. Toronto lives and dies by the home run, so repeating performances from games 1 and 2 should prove to be the difference in the series, otherwise, Kansas City may be heading back to Kauffman Stadium facing a must-win scenario, down 3-2.

Stealing a win on the road is never easy, but if the Royals can leave town up 3-2 over the Blue Jays, one would have to believe a game 6 appearance from Yordano Ventura in front of the home fans will heavily favor KC and send them to a second-consecutive trip to the World Series.

With a good chance that Kansas City will head back to Kauffman Stadium for a game 6, tickets are still available at tremendous value at Tickets For Less. With zero hidden service fees, what you see is what you get on all prices for every available purchase. Should the Royals lock up the series in Toronto, all games purchased are 100% fully refundable. Head to Tickets For Less, today, and secure your spot and witness the Royals make history as they aim for another World Series appearance. Go Royals!