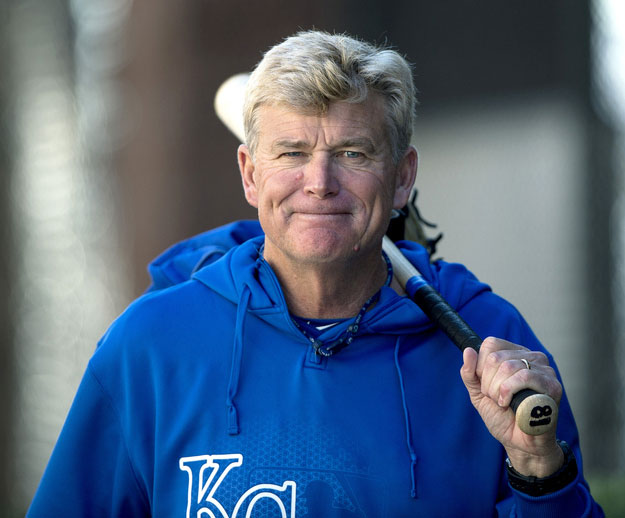 While we all await news on Alex Gordon coming or going in this free agency season, I thought it would be nice to look at an early Christmas present the Royals recently received.  No, I’m not talking about Joakim Soria, although the return of the franchise’s third all-time saves leader will serve manager Ned Yost and the bullpen well.  I’m focusing on everyone’s favorite first base coach Rusty Kuntz, and when I say everyone, I literally mean it.  Players, management, broadcasters, fans and even umpires love the man with the golden locks and the high-pitched voice.  When Kuntz missed a trip in August due to a sinus infection, an umpire asked me about Rusty’s health.  After giving him the details, I passed on to the ump that Rusty hoped to retire after the season.  The umpire just laughed and said, “He told me the same thing ten years ago in Pittsburgh.”  So when the Royals announced earlier this month that Kuntz would return for 2016, I informed the umpire, who replied via text, “I’m glad Rusty is coming back.  He is a great guy.  He will be around for another ten years.”

My broadcaster partner Jeff Montgomery and I interviewed Kuntz on Sports Radio 810 this week and he told us, “I guess I’m just truly blessed by being around a bunch of guys that want to see if I can actually coach until I’m 80.”  It’s not that he doesn’t love the job, or that he’s old, even if he wants you to believe that.  Kuntz will turn 61 in February and brings endless energy to the Royals.  He’s spent well over half his life in big league dugouts and coach’s boxes, a lifetime’s worth of hours scouring video and throwing batting practice.  The injury list of current or past ailments he shared with me last spring training could keep a doctor in business for decades.  Eye surgery, bone chips in his right elbow, broken left arm, lower back, no cartilage in the right knee, bone spurs in his right ankle.  That was before he missed eight games in August with a sinus infection and stomach virus.  So yes, he’s beat up just like most coaches.  More than anything for Kuntz is the fact he loves to teach.  He doles out his wisdom daily to the best baseball stars in the world but he’s truly happiest roaming around the spring training facility and minor league fields while showing young, unpolished kids the way to play the game.

Fortunately for Royals players who revere the man for his expertise and personality, Kuntz will be back.  He says he couldn’t say no to Yost, who came at him with a sales pitch and puppy dog eyes.  Rusty’s trademark phrase, “Oh player,” will continue to echo throughout the clubhouse for at least another year.  Observers will point out that he owns the best head of hair in baseball and is a Robert Redford look-alike, to which Kuntz will again reply, “But have you seen that guy?  He’s old!”  Self-deprecating, off the charts baseball IQ and an integral piece to the puzzle for the World Champion Royals. Whether ready for retirement or not, Rusty will return for 2016.  “I do have a wheel chair or walker clause in my contract next year if I physically can’t walk out to that box and stand for three and a half hours, then I do have the option of sitting down in a walker or wheel chair depending on the terrain.”